I had an excellent surprise today when my neighbor rang my bell to let me know a couple packages had been mistakenly delivered to his house last week. If that wasn’t enough of a surprise, when I opened the boxes, my jaw hit the floor upon realizing that one of them was a brand new Chrome OS laptop – my own Cr-48. I had filled out the application last week shortly after the announcement with the assumption that the laptops were going out to known developers and reviewers, so I did not expect to receive one. Now that I’ve gotten it and played with it for a few minutes I thought I’d do my part and give my initial impression of it.

After inserting the battery and opening the lid, the laptop powered on and entered the initial setup without touching the power button.  The first thing it asked for was my wireless network settings since the entire experience is online.  Putting in my WPA credentials allowed it to connect right away and download an update.  This required a download of unknown size and a reboot, but the entire process completed quite quickly.  It did require me to put in my WPA key a second time after the reboot however.

Once the laptop was updated it was time for setup.  This consisted of entering my google credentials and taking a picture with the built-in webcam.  Setup done. That was easy.

I have noticed a few quirks about the hardware that will take me a little while to get used to.   Not that they are necessarily anything wrong, just doesn’t work the way I’m accustomed so there will be an adjustment period.

The first thing that jumped out at me was the trackpad.  In all of my previous laptops, the trackpad was relatively small and included two hard buttons beneath it.  This laptop has a massive trackpad with no buttons – similar to a Mac.  I’ve never owned a Mac or used one for more than a few seconds, but from my little time with it, I believe it is similar.  The pad is multitouch capable and does have a hard click to it if you push on it hard enough.

Since there are no buttons, that means there is no right-click.  I’m still not sure how I feel about this because I feel like I do a lot of right-clicking in my  day-to-day computer use.  I have learned that a “right-click” is possible by touching two fingers on the trackpad and pushing to get a click.  This seems to work ok, but will take me a little while to get used to.

The next thing I’ve noticed about the trackpad is that it is nearly flush with the palm-rest.  This has been causing me a problem as I am used to being able to tell when my other fingers are wandering too close to the pad.  I have noticed on several occasions that my other fingers will be resting on the pad and messing up my ability to “mouse around.”  I’ve also grown used to scrolling by sliding my finger up and down the right-most edge of the pad, but that capability does not exist here.  Instead, scrolling is done by using a two-finger scrolling motion.  Again, just something to get used to.

Overall, I am definitely struggling to navigate with the normal fluidity that I have grown accustomed to with my other laptops.  The scrolling does not always seem very smooth, and it seems to jump backwards after releasing it sometimes.

The keyboard is also significantly different than I’m used to.  The biggest change is a lack of a caps-lock key.  This has been replaced with a search key.  I think this can actually be quite useful.  I rarely use the caps lock, but I definitely do a lot of searching.  Time will tell if I ever get used to using that key to initiate a search.  Testing it out, it does seem to work well as pushing it opens a new tab with the curser in the Omnibar ready for a web address or search query.

The next thing that has jumped out at me is a lack of navigation buttons.  It does have the required up/down/left/right buttons in the bottom-right of the keyboard, but is missing any of the additional buttons like home, end, page-up/down, delete and insert.  I have learned that there are a lot of key combinations mapped to the keyboard to replicate these keys, but I’ve never been good at remembering keyboard shortcuts so we’ll see how that goes.

In order to help with the keyboard shortcuts, there is a shortcut to bring up a full-screen picture of the keyboard with the shortcuts defined.  If it was possible, I’d include a screenshot of this as I do like the layout and look of it, but I have not found a way to take screenshots in the OS yet.  Bringing up this help also requires a hotkey combination, but I’ve already memorized it – Ctrl+Alt+? – makes sense, huh?  (Edit: I found a way to take a screenshot and actually locate the file to upload it.  Here’s a pic of the onscreen keyboard shortcut map) 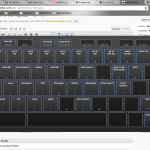 Google has also replace all the F-keys with dedicated shortcut buttons for navigation – back, forward, refresh, fullscreen, next window, brightness, volume and power.  These are actually rather handy – I see myself using them much more often than the traditional F-keys.

And finally the key to it all – the operating system.  As we all know, the OS is literally just a web browser.  Upon booting the laptop you are greeted with the Chrome start page – whatever you have defined your start-page to be.  Speaking of which, I had previously set up sync between my Chrome web browsers to sync my bookmarks, extensions, themes, etc.  Upon first boot I was immediately greeted with my familiar theme, bookmarks and extensions.  I never even saw the default install of Chrome.

Using the OS has been interesting.  Since the OS is just a web browser, there is very little loading time for anything – other than actually downloading websites.  However, I have noticed a bit of lag here and there where I am left wondering what is going on.  Also, as I mentioned earlier, I’ve had a bit of trouble with the responsiveness of the trackpad and more specifically with scrolling.

One thing that surprised me was the capability of having multiple “chrome windows” open at a time.  I fully expected to be limited to one window with as many tabs as I’d need, but similar to a linux desktop, you can have multiple screens.  Since the OS is just the web browser, each screen is just a new web browser, but it does give the capability of separating tabs into different windows if you’d like.

One added bonus (which I’m assuming only exists because this is a developer laptop) is access to the command line.  Pressing Ctrl+Alt+t brings up a full-screen terminal session.  I find this useful because it does have a built-in SSH client to connect to my linux box.  I do wish there was an RDP client to connect to my Windows machine, but I guess I will need to set up VNC and use a web-based VNC client.

Another thing I am interested in testing out is the Google cloud printing.  I do have a printer that is connected to a a windows box so I will need to set up the cloud printing service on that so I can test it out.