I found a good deal on CraigsList for a small GE fridge that I have been able to convert into a 2 corny kegerator. It is GE model WMR04BAPBB. 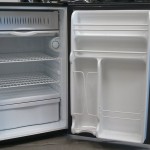 I have not added a tower to it yet, but do plan on adding that in the future. There is a diagram on the back of the fridge that says there is just a single line running on the top of the fridge right near the front, so adding a tower should not be a problem. The fridge did require quite a bit of modification, but none of it was too difficult to accomplish. I followed many different how-to’s out there for converting a mini-fridge and tried to combine bits and pieces from all of them to get a result that worked for me. So here’s a big thank you to all the other how-to’s out there for helping me out. 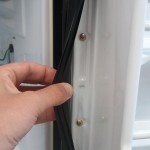 The first thing that I had to accomplish was removing the shelving from the door to make room for even a single keg in the fridge. The shelving comes off quite easily by removing all of the screws from under the rubber seal. There are a lot of screws, so an electric screwdriver is quite handy here.

Cutting the shelves out of the door 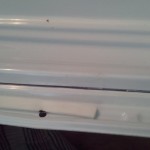 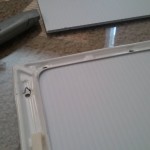 I originally tried to use plexiglass to replace the door insert, but had a very difficult time working with it. I found that the rubber gasket was meant for thin plastic that has a groove in it so the plexi did not fit well into the gasket. The door also has a little bit of contour to it, so when I tightened the screws to hold the rubber gasket and plexi in place the plexi cracked around the holes I had drilled in it. I decided that I was going to need to cut the door insert and use the edge of that to hold the rubber gasket. I still wanted to cover the cardboard on the inside of the door, so I used corrugated plastic cut to fit inside the plastic that I had remaining after cutting the door insert. I taped the plastic pieces together, put the rubber gasket back on and attached the whole thing to the door with the original screws.

Bend the freezer down 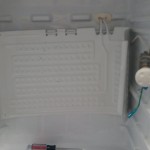 The right side was much more difficult. I used a screwdriver to pry the top part out of the molding and then bent the whole side a little more than 90 degrees to allow enough space for it to fold down. Once the 2 sides were free I was able to slowly bend the whole thing down to the back of the fridge. I was not able to get it completely flat, but I have enough space for a 5 lb CO2 bottle. Bending the freon pipes was not hard (I was in my 100+ degree garage so everything was nicely warm and flexible) but I was nervous about kinking it. Everything still seems to be working, so I must have done all right. 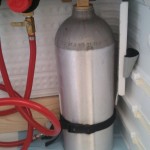 The shelf in the back of the fridge is just barely big enough to hold a 5 lb CO2 bottle, but it likes to tip forward, so I have secured it with an old backpack strap. I cut a piece of 1×4 long enough to go all the way across the back of the fridge and used gorilla glue to glue it directly below the freezer plate. I used 2 screws and attached the strap directly behind where the bottle will go. I found that a strap that had a large buckle would not work because it would not stay tight. The bottle was too small around for the big buckle but luckily I had a second strap with a smaller buckle lying around.

Getting 2 kegs to fit 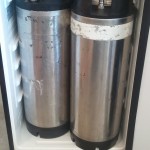 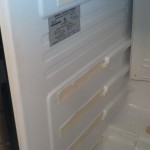 Unfortunately the ridges used to hold the shelves up made the fridge just a bit too narrow for 2 kegs side by side so i had to cut them off. I probably could have just cut them off on one side, but since I was already cutting them off on one side I decided to do both to get as much room as possible. The plastic is pretty thin, so I was able to cut them pretty easily with a utility knife. The hard part was to not cut the insulation too deep. 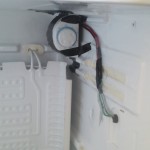 I moved the thermostat up and back to get it out of the way of the kegs. I didn’t want to screw it in place for fear of hitting a coolant line in the side of the fridge. For now I have just used duct tape to hold it in place. We’ll see if that holds over the long term. I did have to extend the wires a little bit, but was able to get some 90 degree flag connectors at Radio Shack to make the connection easily.

A couple of you have asked about the inside dimensions of the fridge so I have finally remembered to take measurements when I had the kegs out last night. After shaving off the shelf rails, it is just over 17″ wide (maybe 17 1/8″ at the most). At the tallest point it is 28 1/4″ tall, and 20 3/8″ of space above the compressor shelf. From the door back to the compressor shelf is 10 3/4″ and the shelf is 6″ deep. Hopefully this describes it well enough for you to get a good picture of the space. Let me know in the comments if it is confusing. Unfortunately I don’t think you will be able to ferment in this fridge unless you ferment in a corny keg. Sorry it took me so long to get these details.

The finished product and more pictures

Here are a few extra pics I took throughout the process, including a couple of the finished product – finished for now anyway. I will try to write up my experience of adding a tower once I’m able to get one. 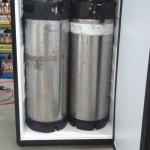 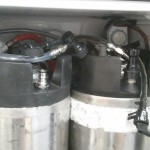 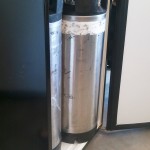 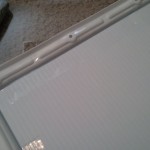 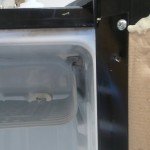 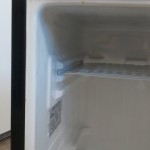 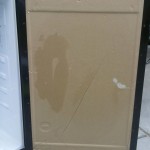 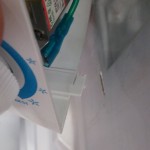 I have finally added a post with a little bit of information about installing a tower on this fridge.  I did not document the process, so all the information is from memory and pics taken after I  was finished.  Sorry I took so long to get this done.  You can find the post here.